When making a pattern for a bulkhead where you have to deal with curved surfaces, things can get messy, especially if you have shelves, cleats, and stringers in the way. Here’s where the joggle stick comes into its own. Use it with a marking board to pick up a series of points that define the bulkhead edge, then use it again to transfer the information from the marking board to the bulkhead stock. Once you try the joggle stick, you’ll never use anything else for fitting complex shapes and curves. This elegantly simple device, which, I’m told, dates back to 19th-century British shipwrights, is as useful today as when it was invented.

Make the joggle stick from a piece of thin wood. I find 1⁄4″-thick birch plywood a good choice for the joggle stick that serves my current project: fitting a 1⁄2″ thick, partial bulkhead. For a much shorter version, thinner stock is preferable; conversely, for an extra-long joggle stick, thicker stock is best. Other materials, such as hardwood and plastic, will work well, too. As long as the material is straight, stiff, and able to be cut so that clean marks may be made against it, it is suitable. 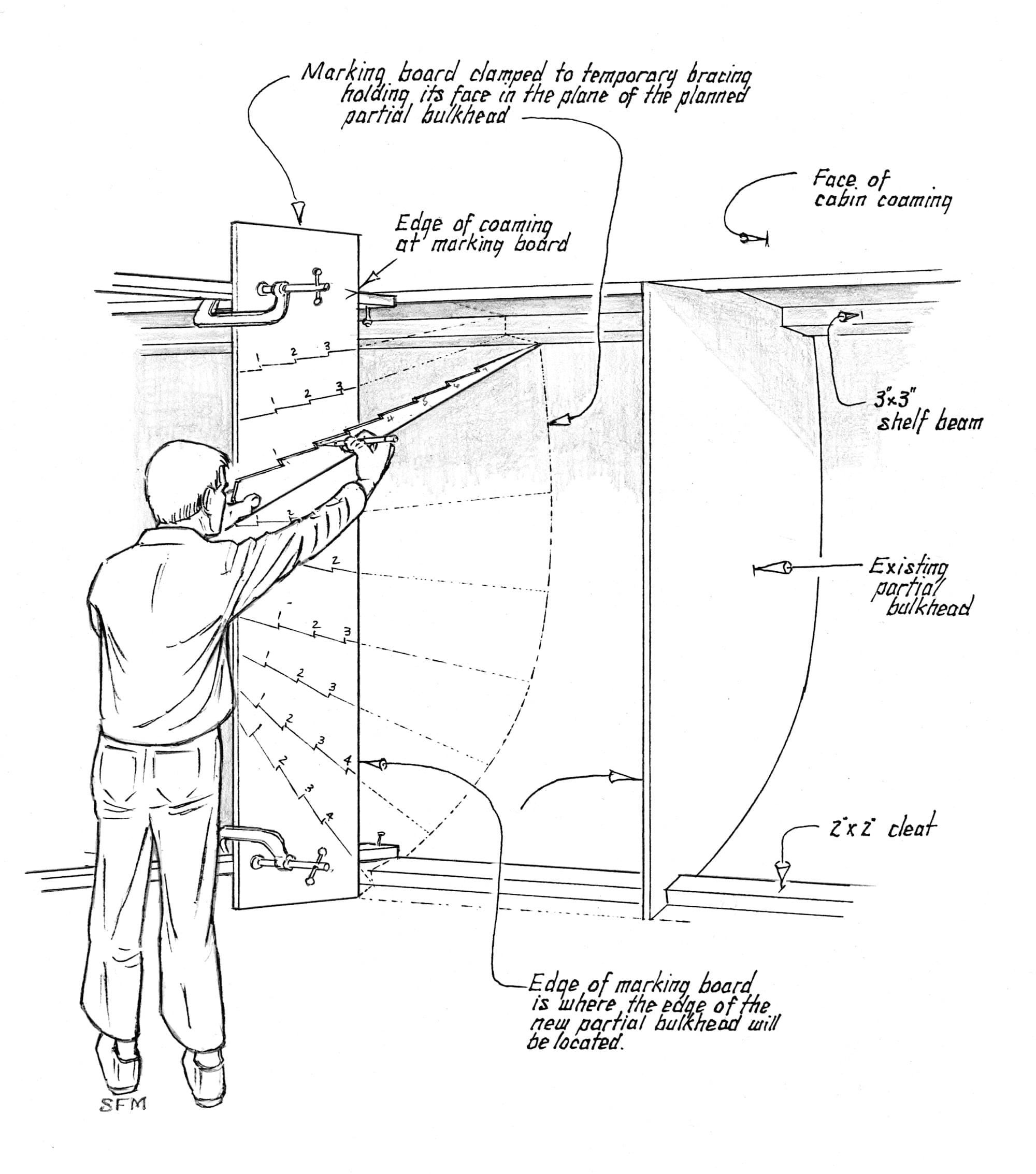 Its length has to be sufficient to reach from the farthest point of the proposed bulkhead to its inboard edge, plus a couple of feet to overlay the marking board. To get the total length of the joggle stick, measure the breadth of the bulkhead area at its widest point, then add 2′ to that measurement. With the length decided, draw a line at a sharply acute angle to the factory (straight) edge of the joggle-stick stock. Then, draw the saw-toothed edge along that line. It’s important to arrange the spacing so that at least two teeth can be marked on the marking board when you’re picking up points. This will become clearer later on.
Use a bandsaw with a sharp, fine-toothed blade to cleanly cut the saw-toothed edge. Cut the step of each tooth before cutting each long run. Number the teeth clearly. Drill a hole in the end so you can hang up the joggle stick when it’s not in use.

An alternative to the numbered joggle stick is to make the teeth irregular in shape and spacing. This type is fine, as long as there is a balance between steps and long runs on the edge.

Also, check the marking board’s forward and aft position to ensure that you will pick up the bulkhead’s widest measurements and account for the forward/aft angle of the hull at that location. Clamp the marking board to the boat vertically at the top and bottom. You may need to rig a transverse board to clamp in absence of suitable direct landings. 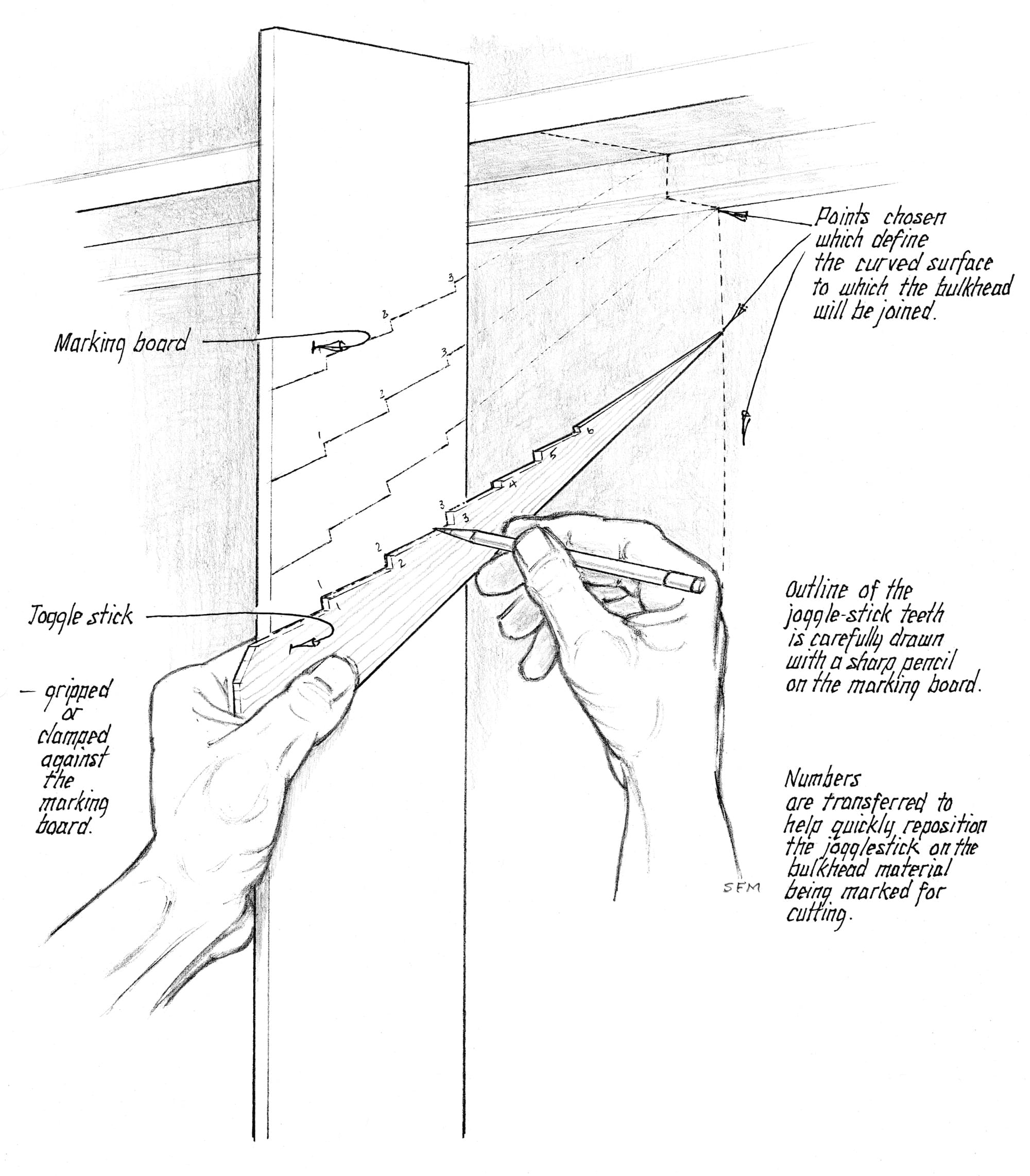 Carry on picking up as many points as needed to accurately define the shape of the bulkhead, tracing and numbering a series of jagged lines on the marking board. The angle at which the joggle stick rests on the marking board doesn’t matter. As long as there are enough points to define the shape you’re trying to replicate and the jagged lines are clearly drawn and numbered, you’ll be fine.

I find it useful to make a rough sketch of the layout in an unused area on the marking board, labeling key profile points to be picked up. A simple example is in picking up the four points (inside and outside corners) around a cleat. If I forget to pick up an outside corner point, I will end up laying out a triangle instead of a rectangle on the new stock. This example is a pretty obvious one, but if you have a complicated shape with many points to pick up, it’s easy to forget how it is supposed to look. Sketches help. 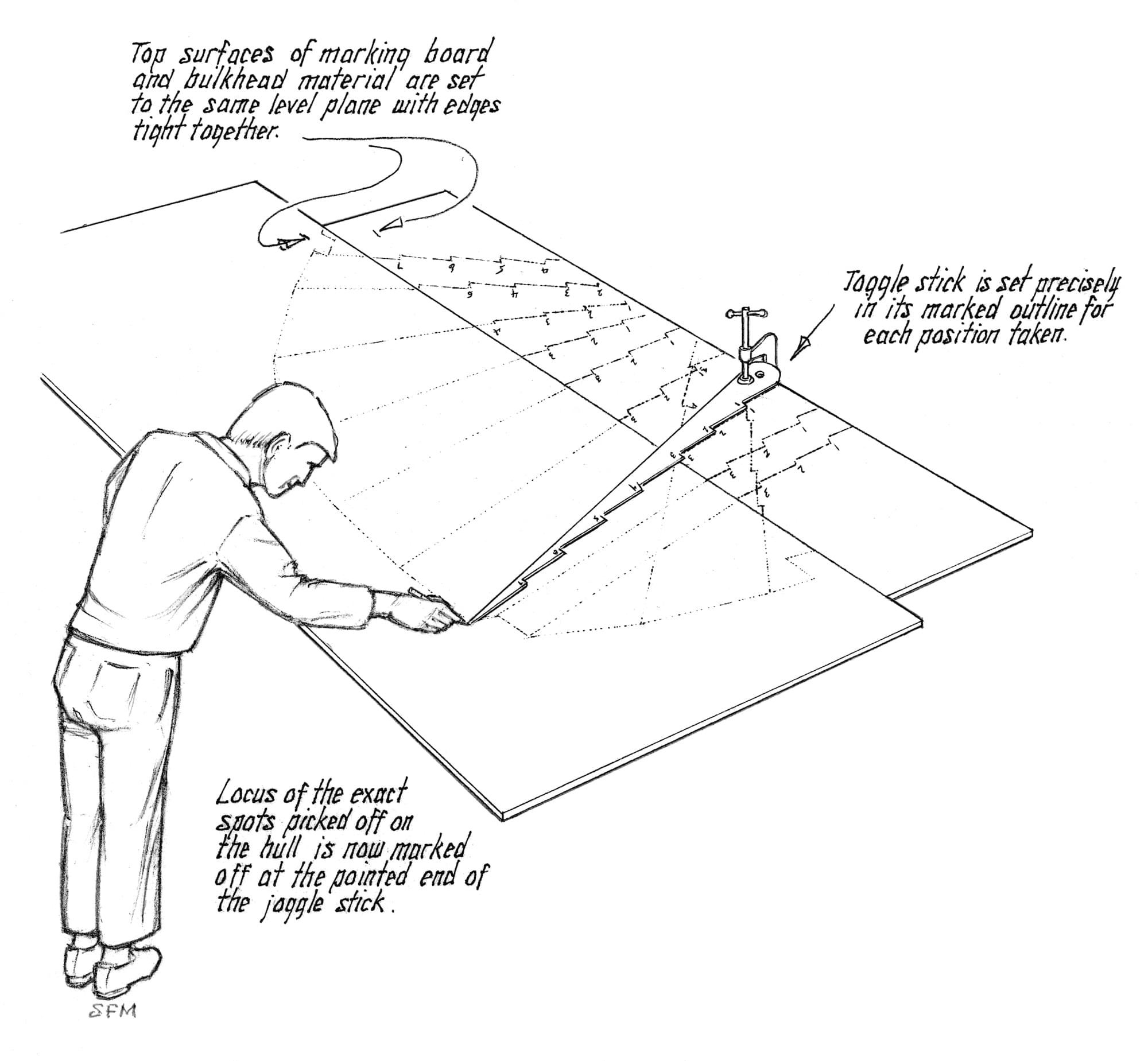 Once you have picked up, marked, and labeled all the points needed to define the bulkhead shape, remove the marking board from the boat.

When finished, connect the dots, fairing them as necessary into a curve. The result is an outline that accurately replicates the shape that was picked up inside the boat. Trim the bulkhead material, bevel the edge as necessary, and take it to the boat. You will find it a perfect fit.

A few words on joggle-stick design: As has been mentioned, it is not critical to have the serrated edge on your joggle stick ordered and numbered. In fact, the joggles can take on just about any shape desired. However, unless you intend to trace the back edge of the joggle stick every time you trace the serrated edge, you’ll need to design your joggle stick with an adequate number of long runs. The steps or zigzags drawn on the marking board become rough locators for the joggle stick while the long runs let you fine tune alignment to relocate the exact point picked up from the boat.

How to Build a Wooden Mast

Planking: An Introduction to Methods & Techniques

The ABCs of Wooden Spar Construction

The Planking Process: From the Sheer Down

The Planking Process: From the Garboard Up